What is the solution to removing pesticides, aflatoxins, endotoxins, and glyphosate from your diet? The superior detoxifier: Calcium Bentonite Clay 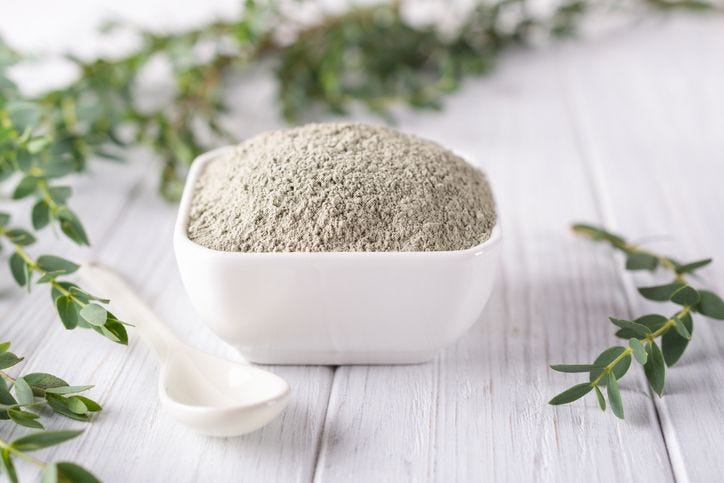 When volcanic ash ages, it forms an absorbent sodium bentonite clay. This clay was named for Fort Benton, Wyoming, where a large concentration of it is found, but deposits are located all over the world. Bentonite clay has been found to have excellent detoxification properties.

A unique form of this clay called calcium bentonite, has been studied for its ability to absorb four very troublesome toxins: pesticides, aflatoxins, endotoxins, and glyphosate. This negatively charged clay has the unique ability to absorb these positively charged toxins to detoxify the body, improve digestion, and improve skin tone. In fact, this clay is commonly used to cleanse the body in general of toxic material. It is even used in skincare products – but there’s more than meets the eye to this form of amazing clay.

Let’s take a closer look at the four toxins that are typically very difficult to clear in humans. First, pesticides are a persistent man-made environmental toxin that you should make an effort to avoid in your diet. Selecting only organic food can help mitigate this risk; however, cross contamination of pesticide spray from non-organic fields to organic fields can occur. Bentonite clay has been shown in several studies to absorb organochlorine pesticides1,2. Because this clay has an affinity for these toxins, it is highly effective when you take it internally with a meal. Bentonite clay and apple cider vinegar mixed together may be effective as a produce wash to help remove some of these toxins from the produce.

Secondly, aflatoxins are toxic chemicals that are produced by certain molds that can damage the liver. Unfortunately, aflatoxins commonly grow on crops such as peanuts, wheat, corn, and beans. Numerous animal feeding studies3 have demonstrated that adding bentonite clay to aflatoxin-contaminated feed of animals helps bind the aflatoxins and reduces or eliminates the toxicity. These studies have also suggested that including calcium bentonite in the diet of animals in small amounts can help to reduce the accumulation of aflatoxins in the liver, which can then improve liver function and overall health.

Thirdly, endotoxins, which are present in bacterial cells, are released when bacterial cells disintegrate. These toxins can commonly cause inflammation, which aggravates and stresses the intestines. New studies show that these bacterial endotoxins are released not only from the resident bacteria in your gut (as previously thought) but also from bacterial endotoxins in certain types of food. The highest doses of these kinds of undesirable toxins were found to be present in pork, poultry, dairy, and chocolate products. However, calcium bentonite clay has been demonstrated to be able to absorb these endotoxins, which then decreases the internal inflammation that they create.

Fourthly, glyphosate is a common but potentially harmful herbicide. It has been found to be present in genetically modified foods such as GMO soy products. The residue of this herbicide remains in food that you consume, thus making its way into your body since it is absorbed with food. Glyphosate is another nasty toxin that calcium bentonite clay is able to cleanse from the body.

Calcium bentonite clay can be a superior detoxification agent if it has been obtained from a high-quality source. Look for a trusted company with a formula of pure calcium bentonite so you can achieve your own optimal nutritional outcomes.

Comments (2)
Penny Bush Jun 01, 2020 00:39
When I take this, I can tell I am removing toxic garbage. I love that we can actually trap them before they do harm and remove anything that has been in our bodies for a long time that was unable to be removed otherwise.

I have a question now tho~ Is this real "Calcium" that I can count toward my daily about of Calcium I am taking in? Or; is this a different form of Calcuim that I should not count?
Reply
Alfred. Owens May 21, 2020 15:13
All to good where is this stuff
Reply
Related Articles
Categories
General Health
Nutrition
Industry News
Adrenal Health
Bone & Joint Support
Brain & Memory Support
Digestive Support
Eye & Vision Support
Heart Support
Immune Support
Men’s Health
Mood & Sleep Support
Weight Management
Women’s Health
Liver Health
Detoxification & Cleansing
Energy Support
Stress Support
Vitamins and Minerals
Heart Health
pH Balance
Beauty from Within
Cellular Health
Wellness Essentials